In Dawson City we took a tour and heard about the gold rush. Listening to the guide, I felt the same excitement that would have befallen the tens of thousands that made their way North in 1896. The town is a living heritage site and throughout the route to gold, there remain ghost towns that went bust soon after the last claims were staked. 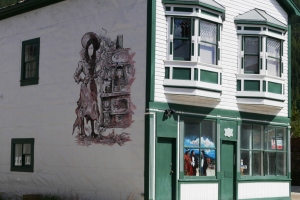 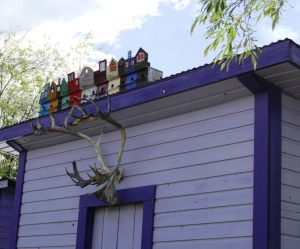 (Above: historical buildings, road work, and lots of bird feeders on many colourful homes)

People tried, balloons and bicycles to get to Dawson City in 1898. Who knows how many died enroute? And for those who made it, violence didn’t kill people, winter did. Prostitution was legal and the workers had to provide a monthly certificate of health to practice their trade.

Dawson City is vibrant, living history — the town still sifts and trills with gold claims and Northern frontier spirit. The buildings are fascinating including these from 1901 which are a result of building on permafrost. 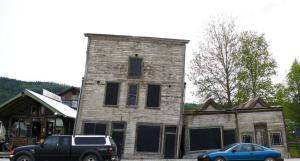 We share a Monday night dance floor with pungent prospectors– one of whom  has long grey hair beneath a hunter’s cap; cockeyed glasses and her cut –off brown fatigues are frayed. Scrawny men with huge beards stagger in and out between smoke breaks, the door breaking bright night into the dark bar. A young woman dances with a fishing knife on her belt and the large paintings behind the band cover cracking walls. One is a young Queen Elizabeth swooning as a Northerner kisses her neck, the Yukon River and autumn leaves the background. Her face and crown remind me her image on a 1960’s penny. Beside it, a caribou on a frozen, snowy river. It’s legs bloodied by two wolves as it fights. We can’t tell who or what will win out.